Changes in the climate of eastern Australia have occurred over the past two decades including increasing temperatures and heat waves, and declining rainfall in south eastern Australia, requiring a re-evaluation of livestock production systems. The NEXUS project will explore the connections between profitability, productivity, greenhouse gas mitigation, carbon sequestration and consumer perceptions of livestock businesses in an increasingly variable climate. With funding from Meat & Livestock Australia's Donor Company, University of Melbourne, University of Tasmania and CSIRO, the NEXUS project will run from March 2020 – June 2023. It is a multi-party program of collaboration across the Livestock Productivity Partnership, including the funding organisations, University of Southern Queensland and University of New England.

Integrated assessments of seven farm case studies from Tasmania to north Queensland will be conducted to identify systems adaptations that are profitable, environmentally sustainable and targeted towards future market opportunities. A reference group in each region made up of local farmers and consultants will guide the research teams to ensure that the systems and adaptation options examined are relevant and findings are robust.
Adaptation options will explore:

The schematic below provides an overview of the project structure. 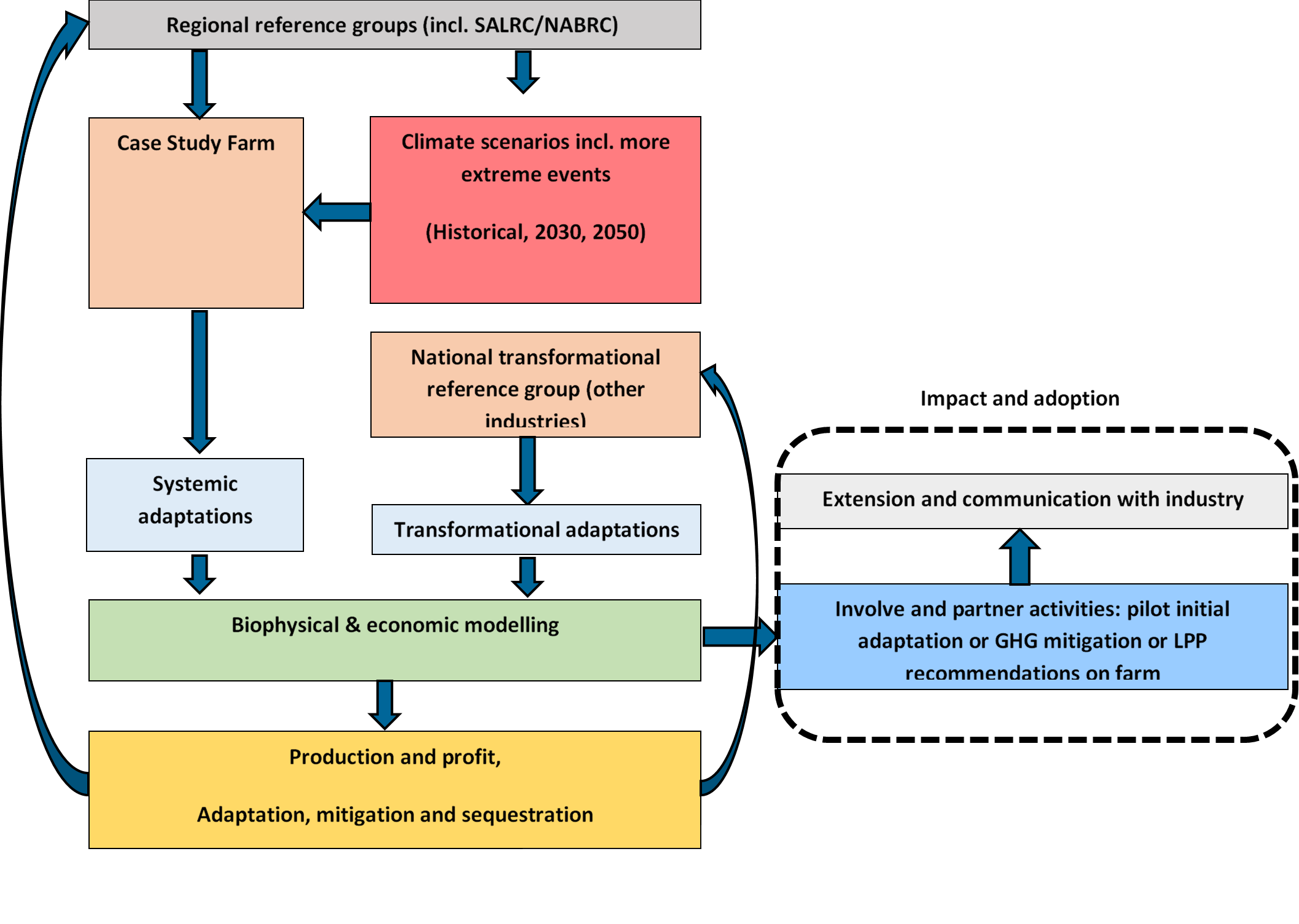 NEXUS will employ an integrated assessment of farm case studies in regions from the North of Queensland to the Midlands of Tasmania to identify systems adaptations that are profitable, environmentally sustainable and targeted towards future market opportunities.

The case study farms are in the following regions: 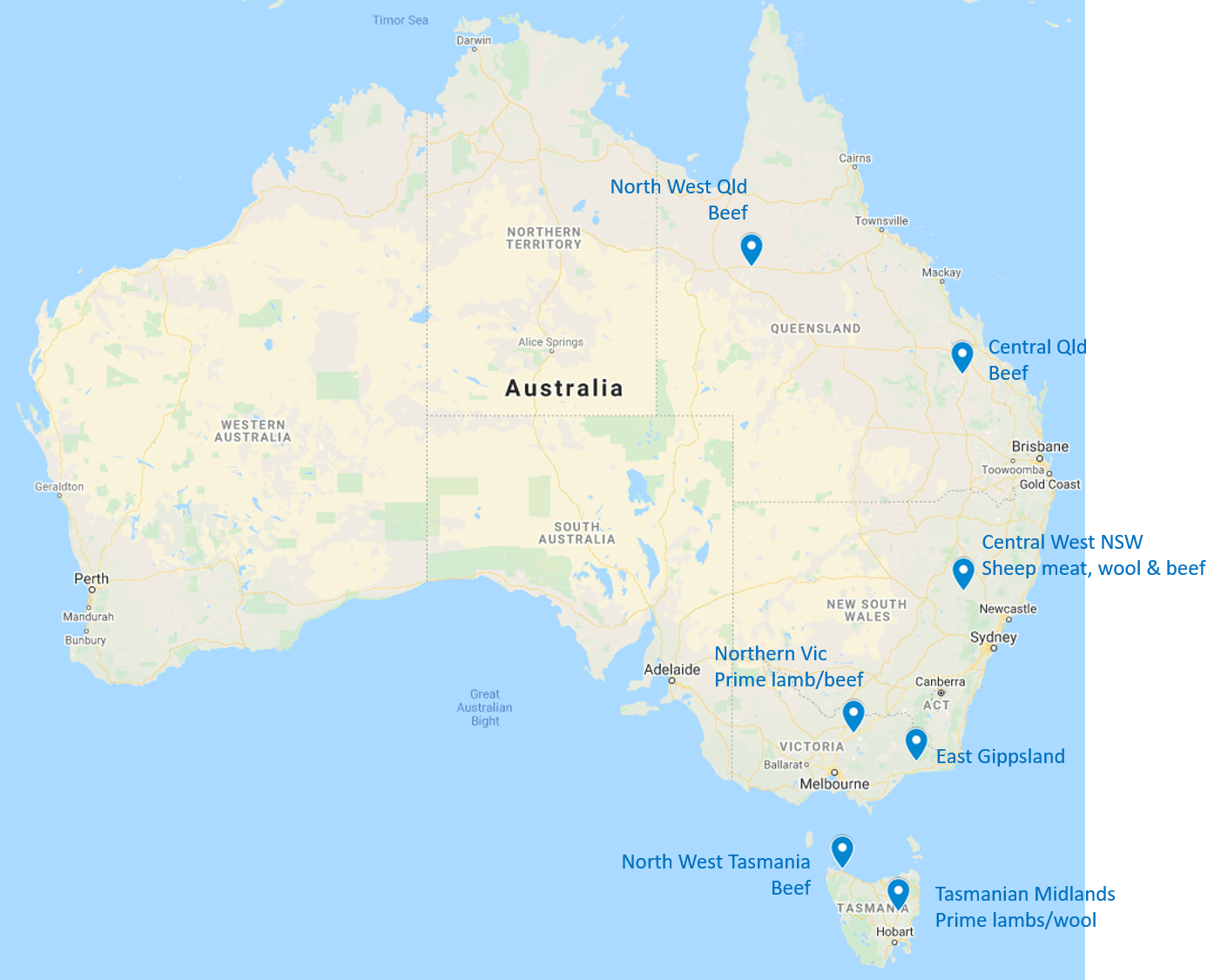 Each case study region will utilise a standardised protocol and be guided by a regional reference group to ensure that the systems and adaptation options examined are relevant and findings are robust. Adaption options investigated in each region will include investigation of feedbase, animal genetics, technology and management options, as well as options to capture value from emerging carbon markets. Combined, the case studies will inform future research and development investment in grazing systems with higher resilience to climate challenges across eastern Australia and will provide a series of farm systems that can be used to either demonstrate or research options to raise profitability in each region.

Project partners will, in the initial stages, develop standardised protocols that will be utilised at each site to ensure that consistent approaches and topics across sites are investigated – although the specific topics tested will be adapted to suit regional conditions – and to ensure consistency of project reporting. Protocols will be developed for:

During stage one, case study farms will be selected then investigated using current management under historical, 2030, and 2050 climate scenarios and using both incremental and variable approaches.

To support investigation of adaptation options the project teams will each draw on the input of a regional reference group. These groups of 6-8 farmers, advisors and researchers will be formed with advice from the relevant SALRC or NABRC committees. These groups will play a key role in ensuring that that the work is regionally relevant by informing the selection of case study farms, defining the adaptation options to be examined, testing modelling assumptions, and providing critical feedback on the project results. An iterative approach will be used incorporating cycles of feedback from the regional groups. Reference groups will include leading farmers and consultants in each region.

The NEXUS will also consider wider, longer-term transformative level adaptation options. These options will be modelled on the case study farms to inform the development of R&D priorities that are longer term and higher risk but with a view to delivering transformational level change to the industry and its capacity to adapt to future climate scenarios.

For more information email Brendan Cullen or contact him by phone on +61 03 8344 8028. Links to project output will be included here when available.